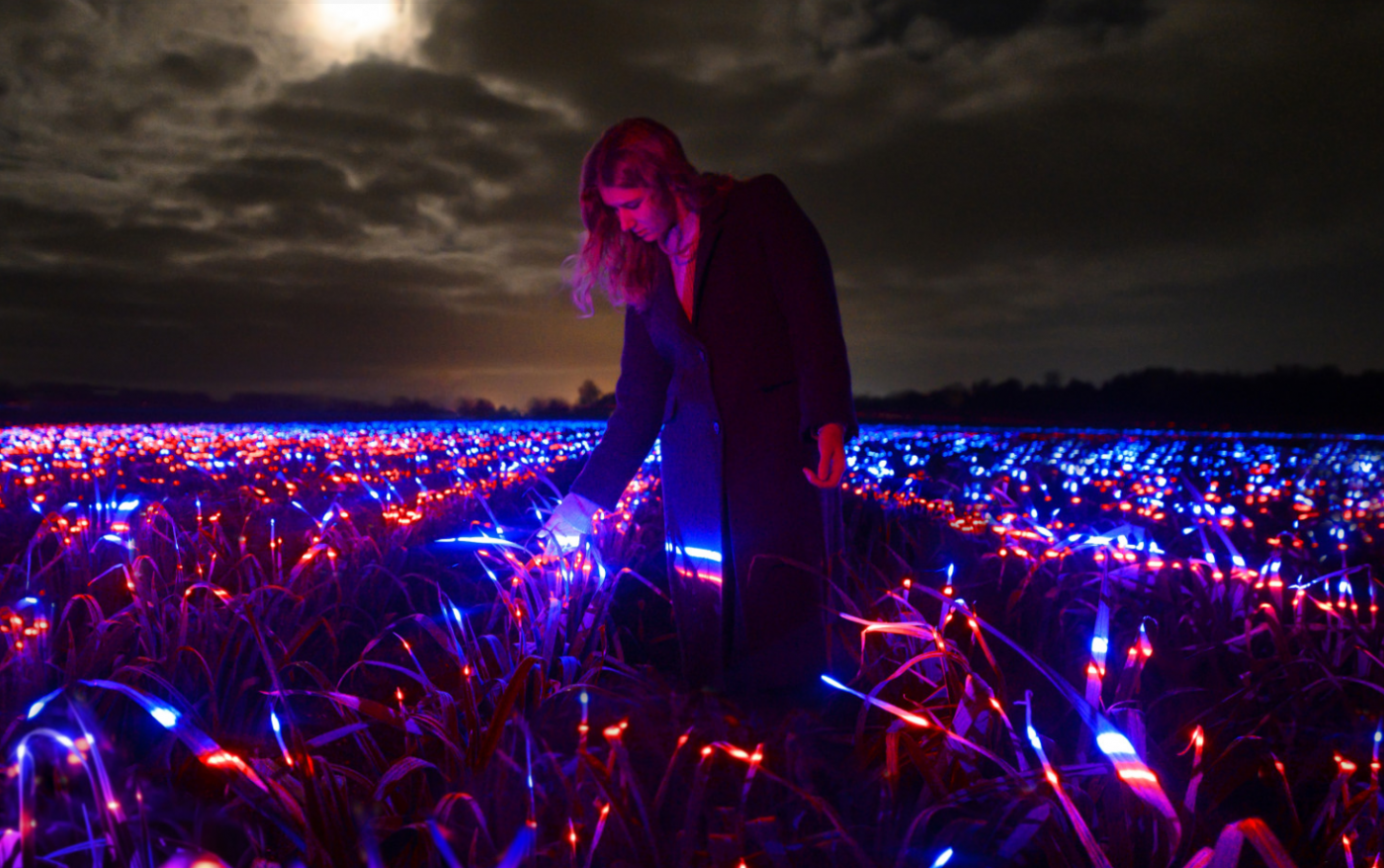 Dutch artist and innovator Daan Roosegaarde’s GROW project is inspired by photobiology light science technologies, which indicate that certain combinations of blue, red and ultraviolet (UV) light can enhance plant growth and may reduce the use of pesticides by up to 50%.

GROW, which was developed with partners Wageningen University and Rabobank, is trialling its vertical ‘light recipe’ across an enormous field of leek at Lelystad in the Netherlands. The country is one of the world’s largest agricultural producers, exporting €65 billion ($78.8 billion) of fruit, flowers, vegetables, meat and dairy products each year.

Specialized LEDs are commonly used to grow crops in greenhouses and are increasingly seen in ‘vertical farms’ in cities. However, scientists believe there may also be potential for using LEDs in more traditional and rural settings.

The solar-powered LEDs augment the light plants normally receive during the day. Roosegaarde’s project is also investigating whether brief exposure to some wavelengths of UV light could reduce the need for pesticides.

“A specific ultraviolet light activates the defence system of plants,” Roosegaarde told Dezeen. “And what is interesting is that it works on all crops. So we can reduce the use of pesticides.”

Roosegaarde’s eventual goal is to take the artwork on tour to 40 different countries, with each featuring a local or national crop and tailored light recipe.

Landscapes of the future

Studio Roosegaarde aims to create “landscapes of the future” and a previous project saw the artist/innovator turn a health hazard into a thing of beauty.

The Smog Free Project consists of a seven-metre-tall tower that sucks up polluted air and cleans it at nano level, before converting the carbon into diamonds.

Sustainable food and agriculture is key to meeting all four pillars of food security – availability, access, utilization and stability, according to the Food and Agricultural Organization of the United Nations (FAO).

Top
We use cookies on our website to give you the most relevant experience by remembering your preferences and repeat visits. By clicking “Accept All”, you consent to the use of ALL the cookies. However, you may visit "Cookie Settings" to provide a controlled consent.
Cookie SettingsAccept All
Manage consent

This website uses cookies to improve your experience while you navigate through the website. Out of these, the cookies that are categorized as necessary are stored on your browser as they are essential for the working of basic functionalities of the website. We also use third-party cookies that help us analyze and understand how you use this website. These cookies will be stored in your browser only with your consent. You also have the option to opt-out of these cookies. But opting out of some of these cookies may affect your browsing experience.
Necessary Always Enabled
Necessary cookies are absolutely essential for the website to function properly. These cookies ensure basic functionalities and security features of the website, anonymously.
Functional
Functional cookies help to perform certain functionalities like sharing the content of the website on social media platforms, collect feedbacks, and other third-party features.
Performance
Performance cookies are used to understand and analyze the key performance indexes of the website which helps in delivering a better user experience for the visitors.
Analytics
Analytical cookies are used to understand how visitors interact with the website. These cookies help provide information on metrics the number of visitors, bounce rate, traffic source, etc.
Advertisement
Advertisement cookies are used to provide visitors with relevant ads and marketing campaigns. These cookies track visitors across websites and collect information to provide customized ads.
Others
Other uncategorized cookies are those that are being analyzed and have not been classified into a category as yet.
SAVE & ACCEPT
X
X